Taking in the Rain 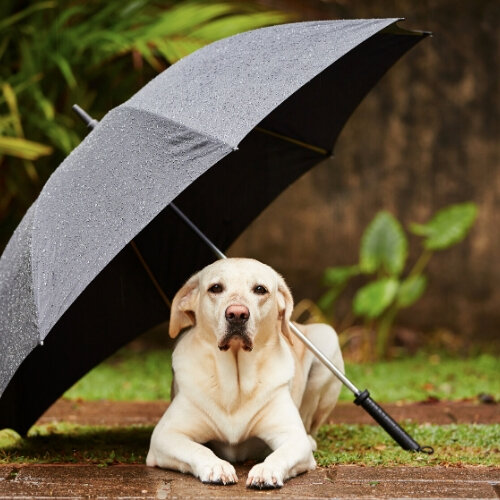 The other day I got in my car and melted a little more when the temperature read 107 degrees and I was parked in the shade.  Holy crap.  It is only May and this hot already. I cranked up the max hurricane force A/C and fan and my daughter’s dog had her nose right on the vent.  Didn’t blame her a bit.  My nose would have been there too but then the driving would have been more erratic.  So, I aimed my side to blast on my face and pits and off we went for walkies in the park.

Now walkies also means putting on the bug stuff so not only the mosquitoes say no thanks but now the huge biting deer flies that can make a horse buck and rear and let me tell you I buck and rear if they bite me too because they don’t have something they jab into you like a mosquito, they just take a chunk of you and it hurts.  I had to smear that stuff from ears to ankles on the fleshy bits.

I like this walk because 90% of it is in the shade but when it is that hot the sweat rolls off my head and goes south, detouring a bit when it hits underwear but that doesn’t stop it.

In fact, if memory serves me, there was a time long ago when the Hawaiian muumuu was popular, and I would have given up my soggy underwear for one of those and gone commando in a heartbeat.

Sweat.  Yes, I glistened from head to toe.  I looked at the sky from the parking lot and was happy to see some clouds rolling in.  Now I have learned that clouds in Texas do not necessarily mean nice cool rain like I am used to in Oregon.  Nope.  Often the wetness that falls from those clouds creates a sort of steam bath effect and it gets even hotter.  I was not a happy camper thinking of that as how could it get any hotter and not light the leaf litter on fire.

I gauge the dog as an indicator of my wimp hood in the heat and even she gave up pulling my arm out of the socket for the squirrels and lugging big sticks along the trail and seemed happy to walk through any puddle she could find at a reasonable pace.

My clothes were drenched when we finished but I am happy to report that now it was only 97 degrees.  We still blasted the air on us, and the dog still rested her nose on the vent as I dripped on the seat on our way back.  The clouds were piling up.  I wondered if doing some kind of rain dance would help and went over a few steps in my head.  Yes, I took lots of dance lessons and a few came to mind so don’t roll your eyes at me like that. Maybe I could tap my way to rain.

I went back to my little caravan and sat outside in the dark and listened to Adele sing “Set Fire to the Rain” and then Phil Collins sang “I Wish it Would Rain” and as it got darker I switched to “Purple Rain” by Prince, then James Taylor and Neil Sedaka and even Gene Kelly singing “Dancing in the Rain”. I definitely wasn’t the only one who thought about rain.

I could see the lightning going cloud to cloud in the distant thunder heads and then I heard the thunder for real and knew it was coming.  I was feeling tingly all over and as the drops started to fall and the thunder got closer, I came inside to watch.

The difference is in the ferocity and energy and determination of the rain.  In the Willamette Valley in Oregon (where most of the rain falls) it is a soft, consistent rain.  It does get your attention when you don’t see the sun for days on end, but it isn’t screaming in your face either.

The rain that fell that night was a get out of the way, knock you down, kick your ass, shut up deluge.  I LOVED it.  Big time.  And wonder of wonders (it was that dance I did in the dark) the temperature dropped 25 degrees.  I could breath again.  The sweat dried up. I walked in the morning and my phone weather app said 67.  There was a rainbow in my heart.

I think I like it cooler because I grew up in the coolness of Portland.  It is what I got used to.  But I love desert heat and tropical heat too and even this hot May in Texas. Without this heat I wouldn’t get to hear the tree frogs or the cicadas or see the fireflies.  And I wouldn’t get to see the majestic, crackling, light up your heart storms.  So, in spite of the discomfort of long sweaty dog walks and a fondness for A/C I am doing fine.  And I hope you are too.

Share This Article
PrevPreviousFeeling Shitty Sometimes? Welcome to the Club!
NextHow Full is Your Tank?Next